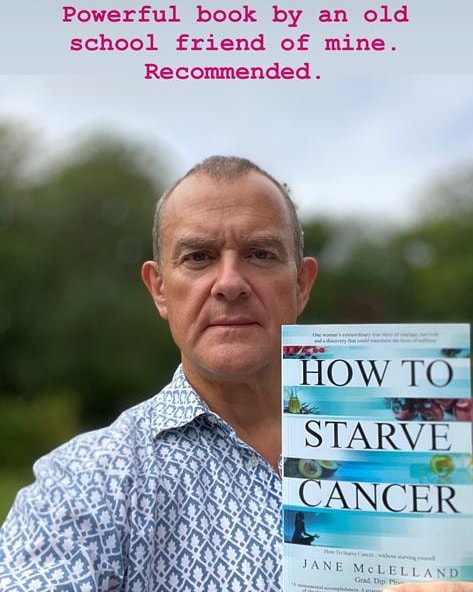 Jane here with my third blog. ‘What?’ you say. Sorry gang, I decided not to send out my second blog as it was not exactly upbeat – I was having a particularly tough time with both my health and a setback to my plans for building a range of resources (App/online course/supplements) – if you want to read it, I did post on FB and this is the link on my website:

An important point from that blog that I will repeat – please use my website for ordering the new supplement line from MCS formulas using the code Jane5 at the checkout as I get a tiny thank you. You do not need an account. Find Daniel’s products here:

On a more positive note, this week I want to share with you an exciting article out that clearly shows the metabolic rewiring that occurs with chemotherapy, this is not exactly news to most of you as you knew that already, right?  What I like about the new research discipline of metabolomics is the ability to pinpoint exactly what is happening in a cluster of cells, by examining the chemical fingerprint left behind by the metabolic processes, rather than looking at what is happening in 2D in a petri dish. It is a far more accurate way of finding out how the cell is behaving and reacting to its environment.

I posted this article on my How To Starve Cancer Facebook site but want to send it out to all of you as well as it’s important.

Here is the link, please read, digest and re-read if you need to.

If you’ve read my book you will know that cancer is thought of as wily and clever (it isn’t really, it just finds an alternative feeding route) and will rewire itself when faced with chemotherapy in order to survive. The answer is then to work out which pathways particular cancers tend to favour (online course WILL happen I promise). Although not mentioned by name in the above article, the reporters were in favour of a glutamine blocker, such as DON* (it’s already on my Metro Map) or the pro-drug they are developing of DON. A pro-drug changes to a drug when inside the body. I will admit I am not a fan of DON as it blocks everything in the glutamine pathway- every enzyme – it is not very target specific, so it affects your healthy cells too. This is a problem as it can cause severe damage in the gut and brain. Given its poor record for side effects, the suggestion was made that you may be able to achieve results and lower toxicity by adding DON for only a short period while this metabolic rewiring occurs during the process of it switching from one pathway to another.

I am of the opinion, I may be wrong, that there is a group so desperate to prove their point that the metabolic approach with this newer version of DON – the strong whiff of a patent hangs in the air – they are finding ways they can use it despite the potential for collateral damage. I can see the lure of a catch-all glutamine blocker, but to me it is a blunt and crude instrument, whereas there are less-toxic options for blocking receptors, transporters and enzymes, particularly when you use them in a bigger cocktail of drugs. Besides, it may take many years to get the pro-drug approved. Using DON to block glutamine and 2-Deoxy Glucose to block glycolysis (also on my Metro Map) combined with the ketogenic diet, an approach being used by a few well-known cancer researchers, is an extremely binary approach which I worry will backfire. In my opinion, drug/supplement combinations of lower toxicity are the key to improve effectiveness and reduce the need for higher dosages and the risk of toxicity. Whilst adding more drugs raises the possibility of unwanted interactions, it also raises the potential for synergy – drugs used alone often have limited effect yet when you block more than one pathway, the synergy is magnified many times.

After reading the article above I was curious to look at the original research to find out what other pathways might need blocking as I was already aware that leukaemia became more glutamine dependant as it progressed. It came as no surprise that Siddartha Mukherjee discovered the ketogenic diet did not work for leukaemia last year. So, what else could achieve a more personalised targeted approach?

Reading through the article in Cell Metabolism revealed that throughout the chemotherapy process, rather than a transient response, there is a need to reduce the aspartate receptors for leukaemia. Putting on my detective cap, I got stuck into Pubmed hunting for what you could take to block or reduce this pathway. Surely there were off label options, less toxic drugs for a longer-term, more sustainable result. Ta-da! I discovered memantine (aka Nemenda), used as a nootropic (boosts brain function), a neuroprotective, memory-enhancing drug, although only useful for Alzheimer’s disease for about a year before its effectiveness tails off. It is also potentially useful for numerous CNS disorders from strokes to Parkinson’s and already used off-label for anxiety, depression and pain, including post-mastectomy pain. This drug might provide additional armoury for many cancers but it does come with possible side effects of insomnia (which let’s face it, is not like taking chemo) and there is some suggestion it may increase aggression in Alzheimer’s patients, but it is not yet established whether this is a result of Alzheimer’s or dementia itself rather than the drug.  On the plus side it helps clarity of thinking, improves behaviour in many patients and the ability to look after yourself if mentally declining. After 9 weeks in isolation during Covid lockdown I need it myself!

I love it when I get those ‘aha’ moments. There is a paucity of data on memantine as a treatment for cancer at the moment, however there is some very positive research, much of it very recent,  particularly on gliomas which are very glutamate sensitive (CBD oil and magnesium also help block this receptor) for its radioprotective and radiosensitising effects in these tumours. There is also some data on prostate cancer using it in combination with metformin and the following research released last year (2019) on leukaemia in combination with cytarabine which shows just how useful it could be:

Memantine is going on my McLelland Metro Map, which gets busier every month, I am adding several more pathways for my book update. I can hear a collective groan – more pathways! Yes, I know, more research for you, but it will make personalised treatments even better and more effective. Don’t worry, all will be explained in the online course and in the book update – when I eventually stop researching and publish. If you saw the version of my Metro Map sitting here in front of me on my desk your eyes would pop. I promise I will try and keep it simple.

Thank you to those of you who ordered my book direct from my website – unfortunately customs meant delays of books to the US. This is being fixed, there will be a direct link for US orders on my website so no waiting! I can’t guarantee delivery as fast as Amazon Prime, but it will be better than the vagaries of Royal Mail and US customs.

Don’t forget you can get 40% off the RRP direct from my website with the code EMPOWERME, this makes it cheaper than Amazon.

Let’s keep spreading the message – share this blog and please follow me on Social Media if you aren’t already! Hugh Bonneville, an old school friend (known for his roles as the Earl of Grantham in Downtown Abbey and Mr Brown in Paddington) kindly gave it a plug on Instagram last week (see the pic at the top- yes it is him, a new slimline version). I am going to try my best to persuade him to play the male parts in my book for when I record the Audible version. What do you think?

If you haven’t signed up for email updates, please do so- exciting news cometh.

*6-Diazo-5-oxo-L-norleucine (DON) is a glutamine antagonist and is a possible use in cancer therapy. This antitumoral efficacy was confirmed in different animal models. DON was tested as chemotherapeutic agent in different clinical studies, but was never approved. The last clinical results were published in 2008, though not as DON monotherapy but in combination with a recombinant glutaminase. In 2019, DON was shown to kill tumour cells while reversing disease symptoms and improve overall survival in late-stage experimental glioblastoma in mice, when combined with calorie-restricted ketogenic diet.

STAY UP TO DATE